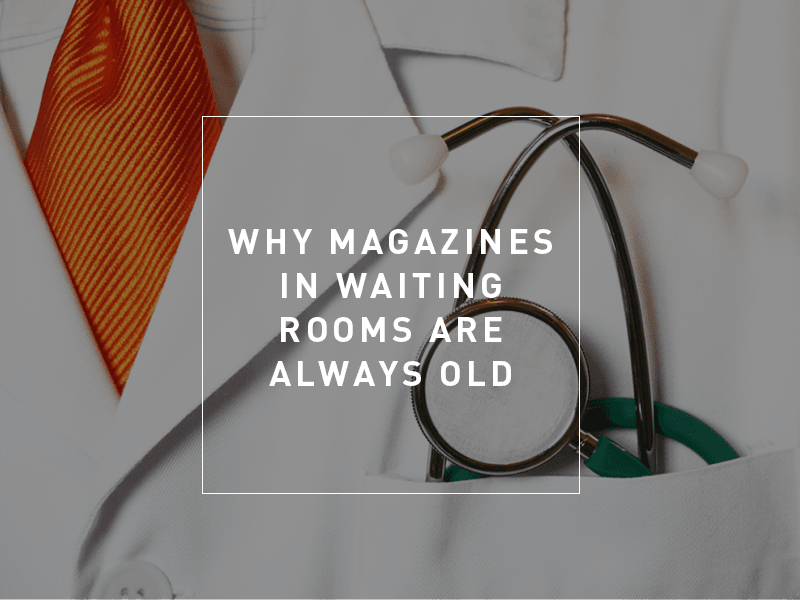 When one doctor grew tired of his patients griping about the lack of current magazines, he conducted a study to figure out the root of the problem.

Do you ever wonder why the reading material in doctors’ waiting rooms is always limited to last May’s issue of Parents Magazine, a 2012 issue of Golf Digest and an Us Weekly so old, the Kim Kardashian cover story predates the birth of North West?

After his patients kept pestering him with complaints about the lack of up-to-date magazines, New Zealand physician Bruce Arroll began to wonder this, too. So like scientific people do, he decided to conduct a study to figure out where his numerous subscriptions were going.

Arroll and his colleagues placed 87 magazines in an Auckland general practitioner’s office, including Time, The Economist, National Geographic and several gossip rags (defined as those “with five or more photographs of celebrities on the front cover”), then monitored them twice weekly.

Of the 82 magazines that had a date on the cover, 47 were less than two months old and the rest were between three and 12 months old.

After a month, the researchers took stock of the remaining magazines and found that 47 per cent of the original 87 had disappeared, at a rate of 1.32 magazines per day.

In other words, up-to-date magazines disappear from waiting rooms because – NEWS FLASH – patients, like you and me, take them.

Also expected—gossipy mags were 14 times more likely to disappear than those magazines that contained actual articles of substance because, well, this is the kind of world we live in.

By the end of the study, all but one of the 27 tabloids were taken, while all four Time magazines and all 15 issues of The Economist remained.

Unfortunately for physicians, stolen magazines can add up in terms of cost – The British Medical Journal, where the study was published, extrapolated that 12.6 million pounds (nearly $20 million) worth of magazines go missing each month at general practitioners’ offices in the UK – so the study authors recommend that doctors stock their waiting rooms with old copies of non-gossipy magazines if they want to save money, thus maintaining the status quo.

The takeaway? Better bring your own entertainment.