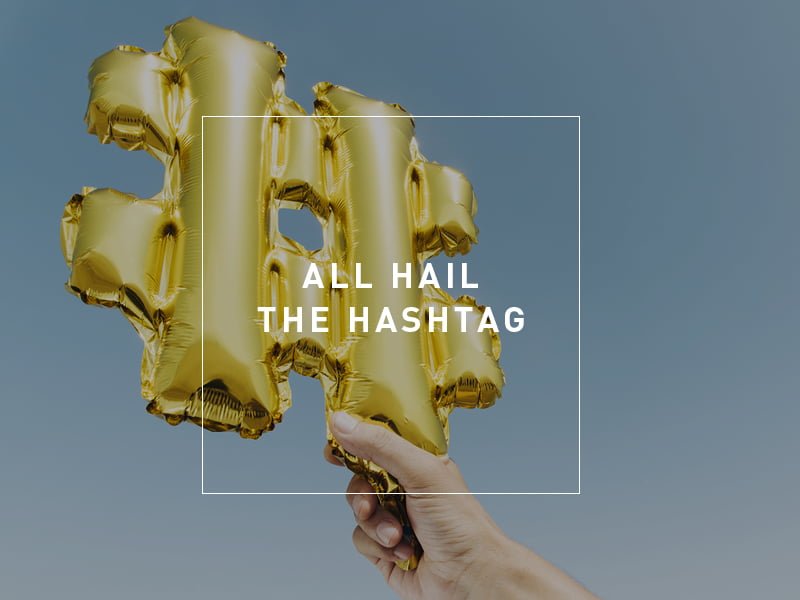 All Hail the Hashtag

With their recent resurgence across all channels, we chat with our Creative Director and Ideas Chick, Mikyla Gilbert – a social media crackerjack and put those not-so-humble hashtags under a magnifying glass. Uncovering the power of hashtags and the best ways to use them in South Australia right now––we share the comprehensive, common sense guide to getting hashtags right.

The Power of the Hashtag

In the digital age, this little symbol packs a serious punch, if used correctly. There’s a reason why you’re more likely to search for a picture on Instagram than scroll through Google Images. Hashtags give social media channels the ability to link specific content to the very audience its intended for.

The old ‘number sign’ or ‘pound sign’ # grew into the hashtag on Twitter in 2009 and has since become such a prolific way of bringing people together. These days, you’d be hard-pressed finding a millennial who knows the hashtag by its former name.

With endless content swirling around in the mighty digital abyss, using hashtags properly across all of your social media channels will keep your brand afloat.

For businesses and internet influencers, connecting directly to your audience is an absolutely crucial marketing tool for your brand.

So, believe it or not, the commonsensical key to hashtag success is simply to know who your audience is and be aware of what your goals are.

Are you a local business, or are you selling globally? Are you an influencer looking for worldwide reach, or do you want engagement from your local community?

‘Why would a South Australian burger restaurant use a global hashtag like #foodporn when they’re trying to connect with a local audience and aren’t selling globally? If you don’t sell burgers to Canada, don’t market to people in Canada’, says Newstyle Media’s Idea’s Chick, Mikyla Gilbert.

Understand what hashtags your target audience follow, and use them. Specify your hashtags so that you wind up in the feeds of people who you actually want to sell to and connect with.

A good hashtag has the potential to direct long-term traffic to your brand, long after that new-content-smell fades from your posts.

Choose your hashtags wisely and you’ll have the chance to connect with the very people who’ll help your business succeed.

‘Remember, it’s not about how many likes you get, if you’re in business, then it should be how many sales you get that floats your boat, not vanity metrics,’ says Mikyla

There are a few basic rules that we just have to mention first:

While hashtags began on Twitter, they’ve since transcended the platform and are now encouraged across the board – that being said, not all hashtags were created equal. Make sure you know to use hashtags differently across all platforms.

Let’s start at the beginning, where so many hashtags spread their wings and go viral.

‘Three hashtags per post is enough on Twitter, used throughout your text rather than all at the end as an afterthought,’ says Mikyla.

While your business isn’t necessarily aiming to become part of a globally viral conversation, it’s important to be aware of that potential, so you don’t become the creator of your own hashtag.

(Bashtags are simply hashtags that, after going viral, no longer retain their intended meaning––aka where your online presence goes to die.)

The best examples of these have been posted by businesses and brands that aren’t exactly self-aware when it comes to reputation. Just google #MyNYPD or #McDStories for some hilarious examples, and remember to think about the kind of conversations you want to be having with your audience.

Be aware of the time you post, and ask yourself if it aligns with the time that your target audience is usually online?

‘Twitter is like a radio, imagine each hashtag as a different station. If I want to reach Mum’s who’ve got kids in #Adelaide, use that hashtag when mums are not busy in the morning trying to get their kids ready for school. Instead maybe hit up that audience later at night after the kids have gone to bed. But, if you want to reach people on the public transport commute, go for it between 7.30am and 9am’, says Mikyla.

If your audience misses a post, it’s unlikely they’ll visit your profile. It’s smart to post several re-worded versions, so that those who’ve missed it get a second chance, and those who’ve already seen it don’t get tired of seeing it again.

‘Don’t put all of your hashtag eggs in one post’, says Mikyla.

Imagine you’re the Easter Bunny and spread them out generously over a bunch of variant posts, so they can be picked up by the most relevant audience.

As 400-hours of video is uploaded every minute on this platform, YouTube has made it more simple than ever to find your favourite (and oddly specific) cat videos, all by introducing the hashtag.

We’ve spoken a lot about providing authentic content for your hashtags, but YouTube makes it crystal clear: if you make misleading or inappropriate metadata, you’ll be kicked off the algorithm.

They don’t accept more than 15-hashtags, but we suggest three-seven, nestled neatly in a clever keyword-heavy description.

Click here for YouTube’s guide to writing the perfect description for their search engine.

From your profile bio to Insta-stories and image captions, there are now so many ways to use hashtags on Instagram.

You might have caught onto a trend that once saw wads of hashtags hidden in the first comment of a post, but in 2018 that’s no longer the best way to do things.

‘Now, not much more than six to eight hashtags belong in the actual post, so keep an eye on the ever-changing nature of what’s working,’ says Mikyla.

Use your profile bio to your advantage, if you’re an #Adelaide based business, include that hashtag and engage your local community from the get-go.

If you want to use a business hashtag in your bio, use it with an authentic call to action so your audience actually has a reason to follow it, and even then do so sparingly.

In your Insta-stories, use popular location tags in your area–­­–they work similarly to a geotag, which is also a great way to bring traffic to your post. If the place that you’re tagging uses Insta-stories, it’s likely your post could end up on one.

You want your images and content to become a part of a public pool of similar images – if your content is authentic and of quality, you’ll stand out in the Explore Feed.

‘Start big and engage your wider audience, then localise. If you can contribute to, or attend any local events, post about your involvement with the event hashtag’, says Mikyla.

If you want to get specific attention from other media, consider tagging them specifically in the image, rather than using a hashtag.

Remember that while extremely high traffic hashtags like #lifehack may give you a boost in vanity metrics, those likes and follows don’t really matter. Consider where your traffic is coming from, if it’s not from your target audience, your global tag is probably not worth the characters.

‘People would argue that the more engagement your post has, the more help you have in the algorithm, but if that’s serving your image into someone’s feed in Hong Kong when you’re selling in Adelaide, how is that helping your brand?’ Says Mikyla.

The home of mood-boards, idea generation, infographics and eye-catching imagery should not be underestimated as a powerful search channel. People literally come here to look for quality content and inspiration that will link them back to the source.

Initially, Pinterest posts were using hashtags, then Pinterest said “Nup, no more hashtags”, then in 2018 Pinterest did a backflip, smartened up and now encourage up to 20 hashtags.

We don’t recommend going overboard, three hashtags are usually enough––if you choose them wisely, you won’t need much more, and you’re less likely to come across as a #spammer

‘If you’re selling globally online, go you your hardest, if not, just focus on your ideal audience. See what other bigger brands are doing and if it looks like they know what they are doing, follow their lead’, says Mikyla.

It’s best to only post a few hashtags at the end of your status, on a new article, or when sharing a colleagues post on LinkedIn.

Remember that this is the kind of platform where you might connect with your next employer or business partner, so you want your hashtags to reflect that. Find the perfect mix of professionalism and personality to sell your brand.

LinkedIn recommends using their suggested hashtags, proposing ideas like #leadership and #productivity. First ask yourself if these suggestions will help you accurately represent your image, or whether they’re just #blessed and #nofilter disguised as corporate sell-outs.

Facebook also uses hashtags to help increase your reach and improve search results, but it’s still best to use just a few good hashtags, dispersed throughout the text.

‘I’m not convinced that you need to use hashtags on Facebook, I feel it looks like you’ve just auto-posted from Instagram. But if you are going to use them, please use them in the text and not at the end in a pile,’ says Mikyla.

Facebook Live is a great way to give your audience a real-time glimpse into your brand ‘behind-the-scenes’. You can use hashtags in your video content and in your descriptions, but the new Facebook algorithm is more focused on the video content itself.

The best way to stay relevant on this platform right now is to ensure you’re keeping people on the site with a good variety of content, and lots of visuals. Keep an eye on what’s trending in your area and what is popular to your target audience.

Regardless of the platform, if you’re living and doing business in South Australia and you haven’t been using these hashtags (choose what’s relevant to your business), now is the time to start engaging with your target audience.

Although you can use these hashtags across your social media platforms, we’re taking you to Instagram for some of the best SA hashtags going around…

Remember to keep up to date with best practices across your social media channels, create authentic content, and examine your analytics to see what’s working for your own target audience.

If all of this has left you with hashtag headspins, get in touch with the Newstyle Media team. Hashtags are just one of the many tools we use to help our clients navigate and shine on a digital platform.

Or, leave us your favourite hashtags in the comments, below.