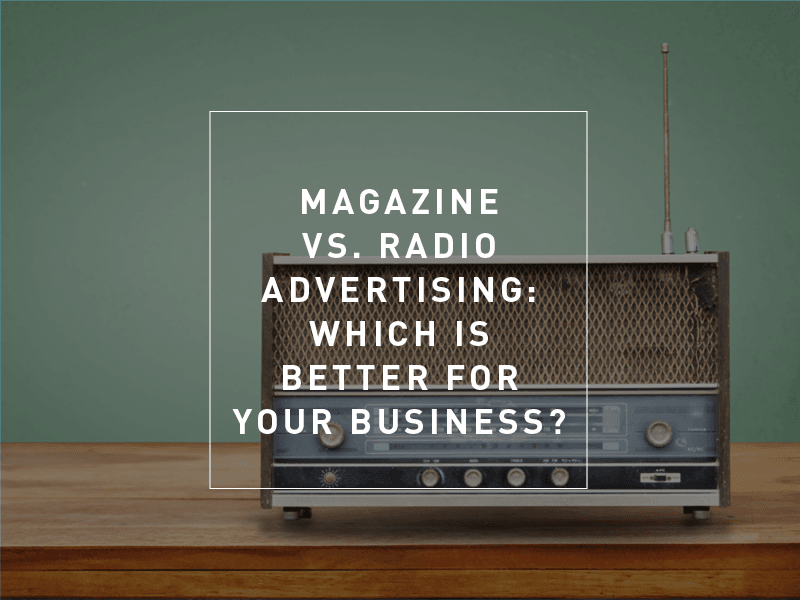 When advertising for your business, it is important that you choose a medium that will give you the best possible reach and return on your investment.

Radio and magazine advertising are two very popular choices, but which one is best for you? Which one is the strongest? Our advertising specialists explore.

While radio advertising can reach people in a “prime time” setting, its interruptive nature can really turn the listener off – literally. Being bombarded with advertising when all they want is to listen to music or the news tends to get a little annoying, which in-turn leads to channel surfing, or switching to another device such as their smartphone or MP3 player.

More than this, the life of a radio ad is very short. You get a 15 – 30 second slot, and once it has been played it is gone until your next time slot rolls around. Unfortunately, this combines with the fact that radio is a passive medium, often on in the background but not really paid attention to.

In terms of your message’s delivery, radio, naturally, isn’t visual. This is a significant downside, as people are more attracted to images and pictures, absorbing and retaining the information they give much faster and with much less effort.

Magazine advertising is highly popular, and for good reason. A highly visual method, magazines deliver your message to your target audience in a creative and attractive way, increasing the speed and ease of retention.

Additionally, the shelf life of a magazine is far longer than that of radio, the beautiful covers making them perfect display pieces. Because people tend to keep magazines, displaying them around the home or business, your advertisement has the potential to reach far more people over a much longer time frame.

The atmosphere surrounding magazines is a large part of their success. As opposed to reaching a viewer when they are otherwise preoccupied, e.g. in their car, when people are reading a magazine they are more often than not in a relaxed atmosphere, ready and willing to take in everything the edition has to offer, including your advertisement.

Magazines also give you the ability to effectively segment your efforts, resulting in a more efficient advertising campaign.

Both radio and magazines have their advantages, however, in this modern day market where people are less willing/able to be interrupted, the attractive nature of magazine advertising shines through. The benefits of magazines are vast, helping you to form a prosperous campaign that will give a great return on investment.

Would you like to learn more about the benefits of Adelaide print advertising? Feel free to give our magazine advertising experts a call on (08) 8221 6355 or email hello@newstylemedia.com.au today.