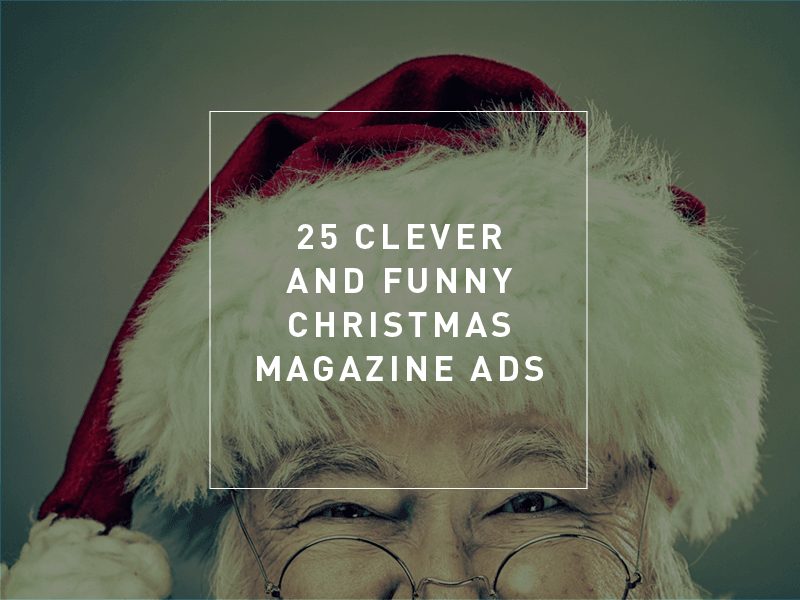 We’re not going to freak you out and give you an exact countdown to Christmas, but if you haven’t given any thought yet to your business Christmas advertising campaigns or creative you really should be PANICKING NOW!

Don’t despair – we’ve found this cracking article with some terribly clever ideas to get your Christmas creative juices flowing. Enjoy!

Christmas is nigh upon us. You’re likely rushing around like a crazy person trying to get all your work done, finish up your shopping, preparing to travel, etc. Let’s take a minute to slow down and absorb some solid Christmas-themed design inspiration.

In this post, we’ll take a look at over twenty-five clever and/or funny Christmas ads. Some will make you laugh, others might earn an approving nod or even a roll of the eyes. All are definitely worth a look and are sure to get your brain in a creative mode.

Obviously, when you’re given the task of creating a Christmas-themed ad, Santa Claus is going to be an idea near the top of the list. Below we see some predictable ideas such as a crashed sleigh for drunk driving but there’s also some really creative stuff. The faded Santa suit is a great idea to convey the importance of color-preserving laundry soap and the “Beware of Dog” sign on the chimney is a nice play. 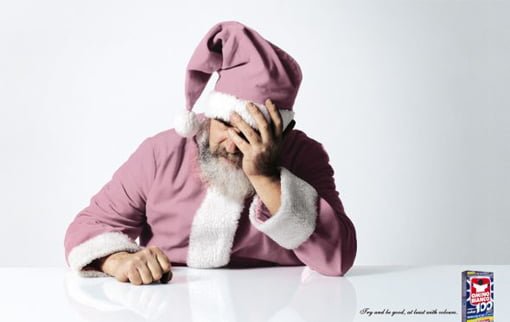 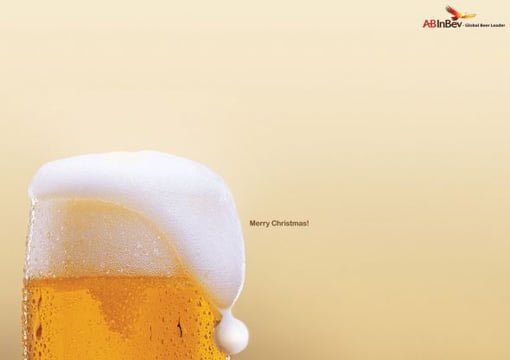 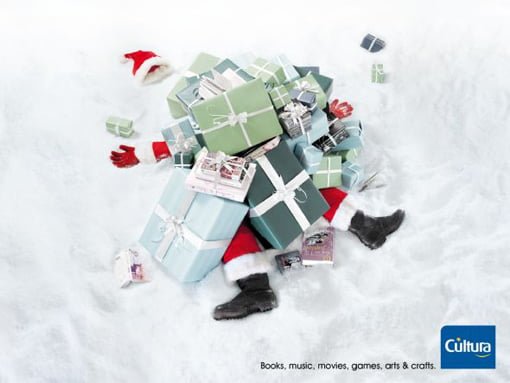 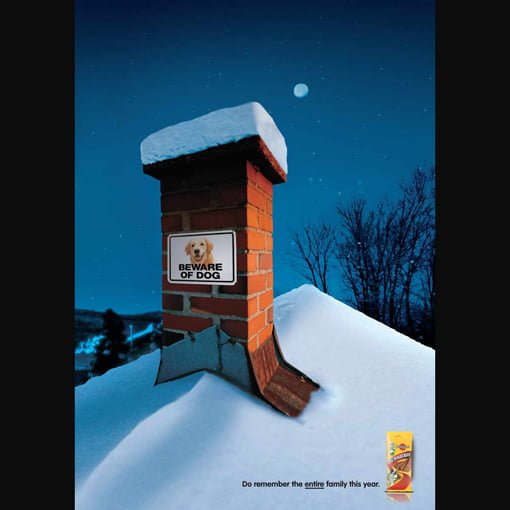 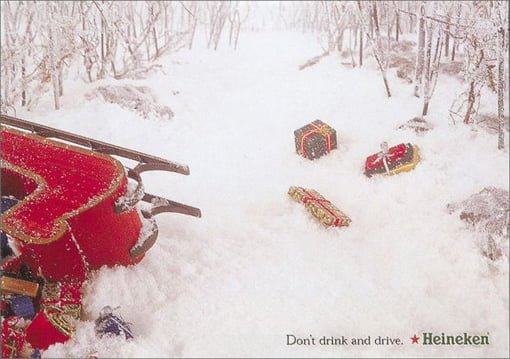 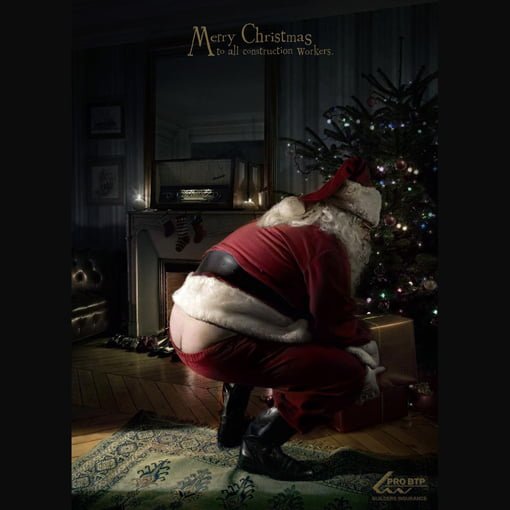 The manger scene is always a bold move for several reasons. It’s more overtly religious than a tree or Santa, which some brands love and others shy away from. Further, putting a twist on the manger scene is a risk because some of your intended audience could be offended given that this is a very important piece of their religious beliefs that you’re screwing around with as a marketing ploy.

Sometimes though the potentially offensive ads are the best kind and I really enjoy these interesting takes on the manger scene. My favorite is the Renault ad with the broken down van, which simply has a brilliant setup that’s used to communicate the idea that the company is open during Christmas.

One that I wasn’t quite sure I liked is the hospital ad. It’s pretty creepy and unsettling. However, it was largely an internal piece that was sent from the premature infant department of the hospital to other departments… in October. Given this information, it’s pretty clever. 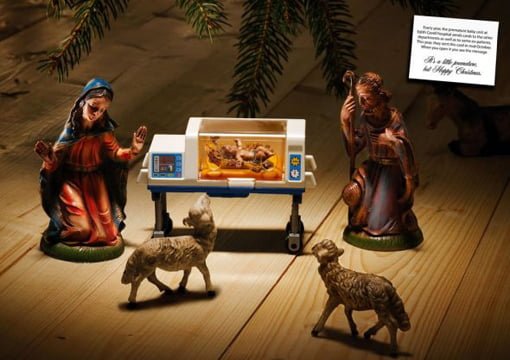 Mercedes Benz: Be there first 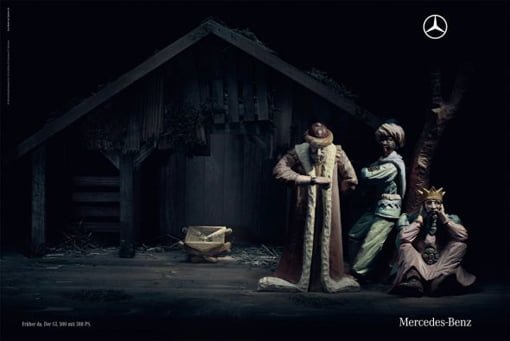 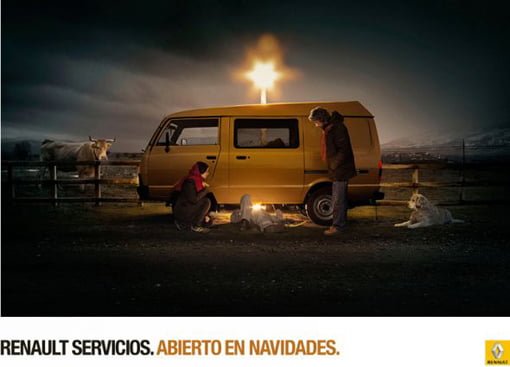 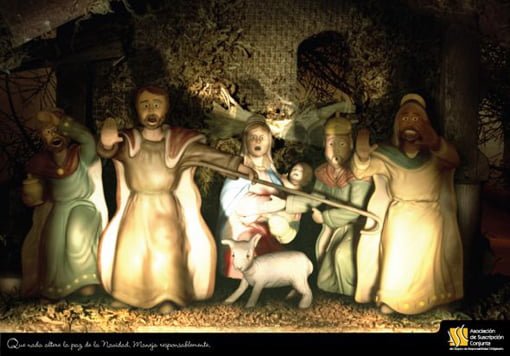 One of the most prominent themes that I came across was the Christmas tree. I think there are a lot of reasons for this. It’s an instantly recognizable symbol that effectively conveys the holiday message. It’s basic and playful shape can be easily abstracted, which makes it an incredibly versatile symbol that you can create with pencil shavings, tire treads or even cigarette butts!

One of my favorites here is the one with the hole cut in the wall and the Christmas tree outside. It completely confused me at first but once you realize that it’s an ad for a chainsaw then it’s instantly funny. 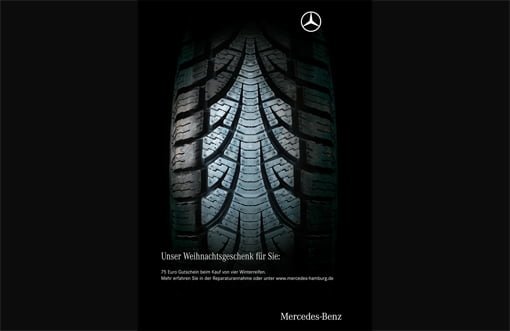 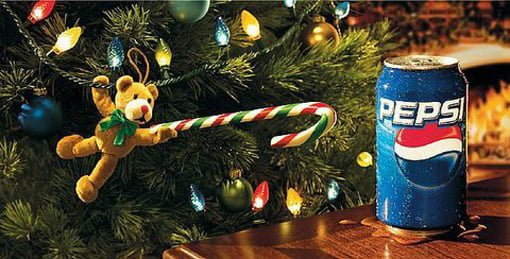 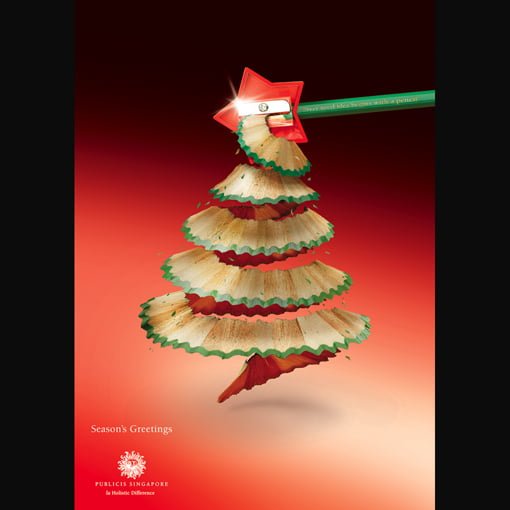 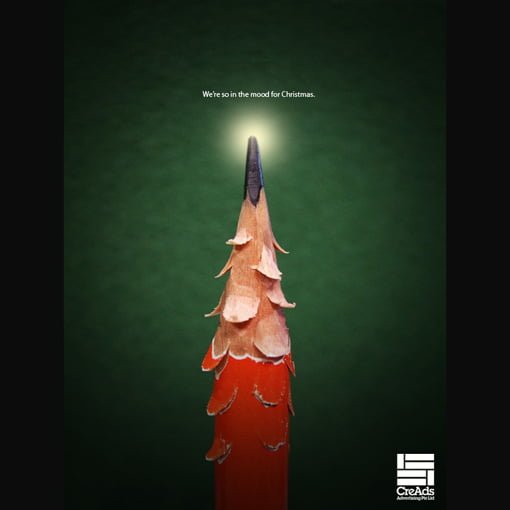 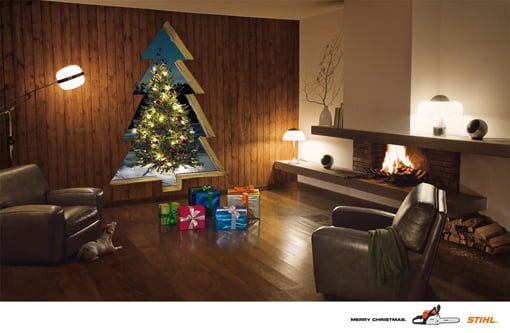 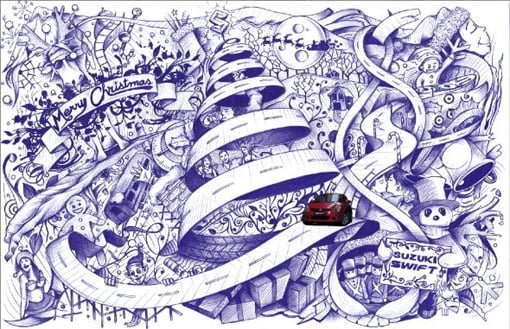 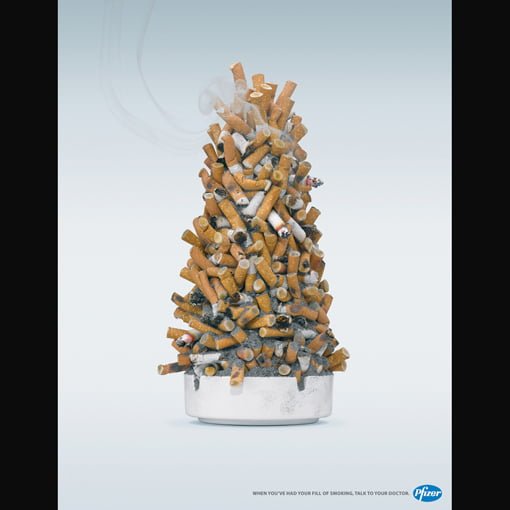 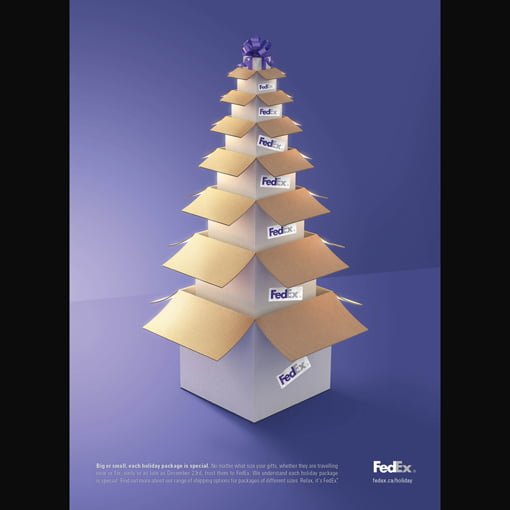 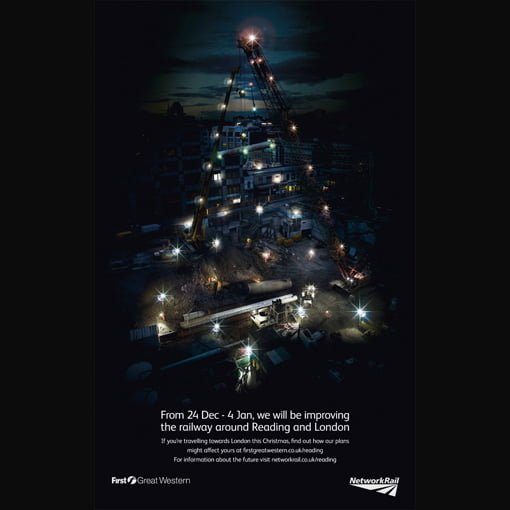 These ads didn’t necessarily fit into any of the themes above, but they’re all really good. I’ll address what I like about some of these individually below.

This one is a thinker. It’s not immediately apparent to everyone what’s going but if you’re familiar with the scrooge story, the symbolism here is perfect. 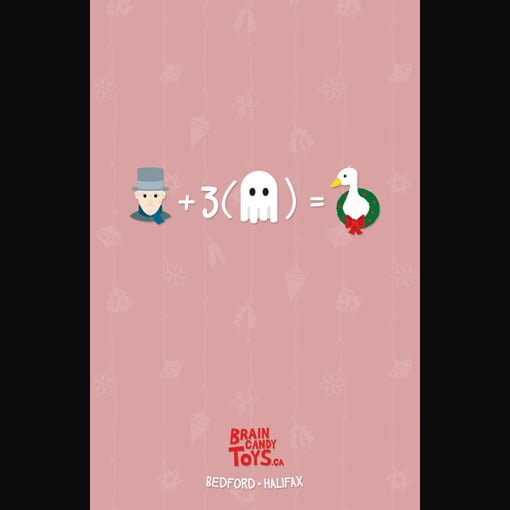 Another Christmas Carol ad with a great illustrated style. The thing that caught my attention here was the graphical theme on the ornaments. Representing the three ghosts and consequently Scrooge’s entire journey with three simple symbols isn’t the easiest task and the designer here pulled it off very nicely. I love the use of arrows and clocks to tell the story. 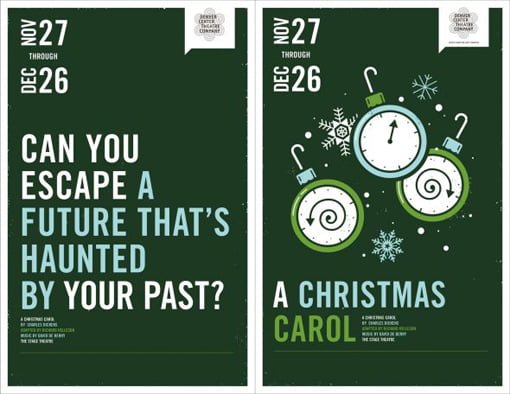 This is another ad in the same Stihl chainsaw series as the one we saw above. I love the look on the guy’s face given that he got a hunk of wood. It speaks to a very specific audience and there are many chainsaw owners who immediately identify with the joy of slicing through a log with a brand new, super sharp Stihl. 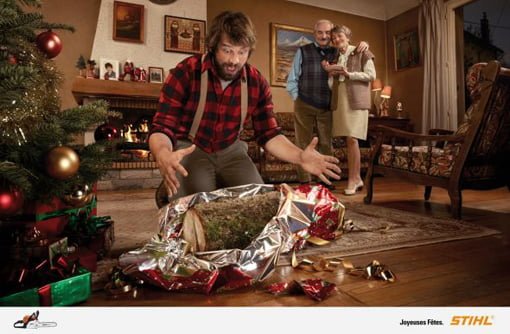 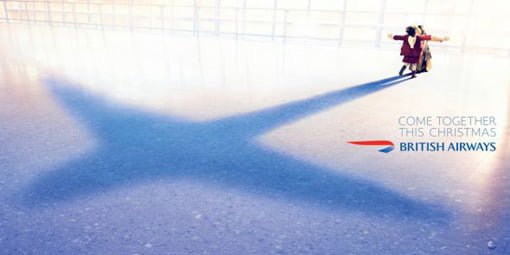 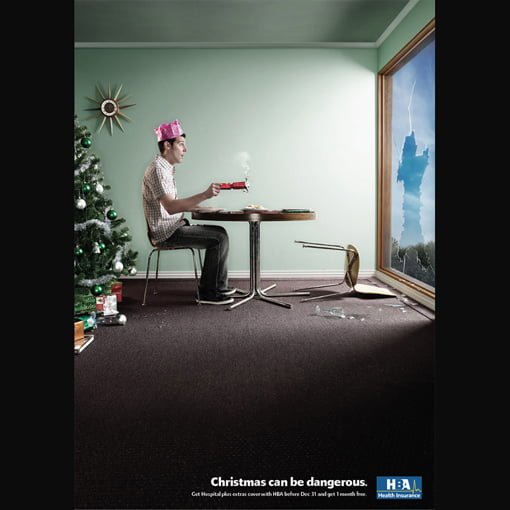 I liked this one not only because of the clever photo and headline but because it’s a perfectly holiday-centric ad but in a much more subtle fashion than most of the other ads shown here. It could really be used any time of the year, but the nutcracker and color scheme are highly suggestive of Thanksgiving and Christmas. 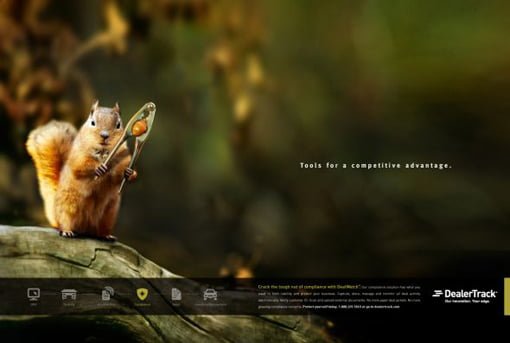 IKEA: Decorate for the holidays, 2 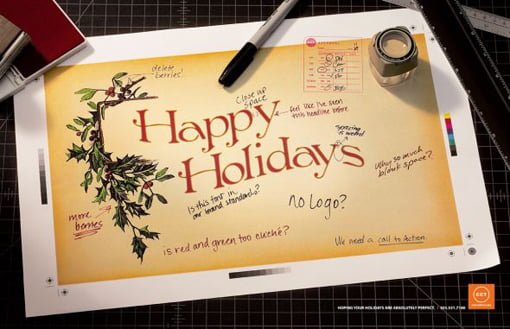 [Some great ideas there for sure. Do you have a favourite? Or have you found a really cool example of a Christmas print ad? If so we’d love you to tell us below]